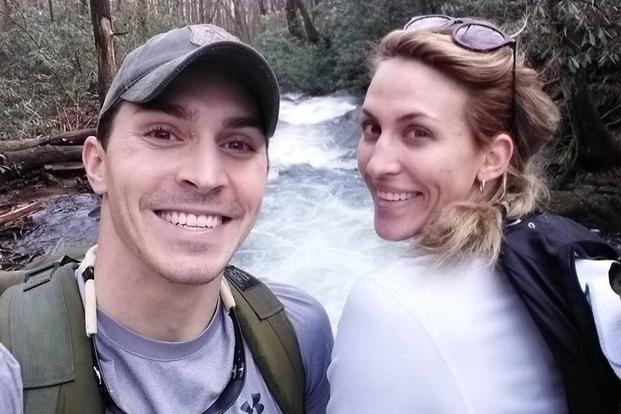 Marine Sgt. Bailey Weis, right, was the first woman to complete the second phase of MARSOC’s grueling Assessment and Selection Course. The commandant of the Marine Corps is now encouraging her to consider becoming an officer. (Courtesy Bailey Weis)

The commandant of the Marine Corps personally challenged a sergeant who made history last year when she reached a major training milestone to rethink leaving the service and instead consider a career as an officer, Military.com has learned.

Veterans wanted at AILOpportunity Unlimited puts you in control of your career.

“Sgt. Weis has the leadership, grit and resolve to be a Marine officer,” said Col. Riccoh Player, a spokesman for Neller. “This is all about talent management.”

Neller has called on Marine leaders to help the service retain its top talent throughout his time as commandant. In a Marine Corps-wide message, Neller the service must attract, develop, promote and retain the “best talent the nation has to offer in order to more effectively operate across the range of military operations.”

Weis could attend OCS as soon as this summer, a Marine with knowledge of her case said. Reached by phone, Weis declined to comment, saying she wanted to remain focused on her future career options.

After completing Phase Two of Assessment and Selection Course, Weis was not chosen to move ahead in the training pipeline. It’s not uncommon for some Marines who pass the highly secretive and physically demanding training not to be selected, according to MARSOC officials, but the reasons they’re not selected are highly guarded.

Since Weis made that far into MARSOC’s training, she’s not eligible to repeat it. The thinking is that she knows too much about what to expect, which could give her an advantage over other candidates. Weis, an aviation maintenance controller, told Military.com in the fall that she would be leaving the Marine Corps, since a MARSOC career was no longer an option for her.

Instead, she said she planned to complete a master’s degree in international relations, and work toward earning a commission in the North Carolina National Guard.

“[MARSOC] would’ve been a nice option,” she said. “But there are a lot of other opportunities out there.”

That’s when Neller stepped in. He called Weis, Player said, and challenged her to consider OCS and referred her to the Marine Corps’ manpower division to determine whether she was qualified. She was, Player added.

Weis, who previously graduated from Infantry Training Battalion, called MARSOC’s Assessment and Selection process one of the most challenging things she’s ever done. She was the only woman in her training cycle, but she said she earned the other Marines’ respect by doing everything with them.

“You really just push your body to the limit and then past it,” she said. “You learn that you can do more than you thought you could.”